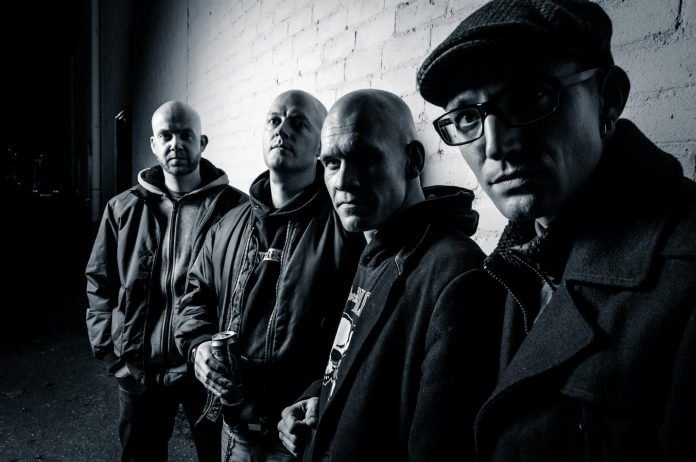 Tim: I’m Tim Steinfort, lead singer and guitarist, Gwenn Neuteboom is our bassist and he also sings, Quint Meerbeek is our drummer and last but not least Richard van de Waerdt, he is our second guitarist.

How is the band came about and who had the idea?

Tim: Well it all started by accident, Music has always been a passion to me. It was the only thing that went well in my life. But when I was 18 years old I got into this badass fight and I ended up in jail and the other guy ended op in a hospital. When I was in prison I concentrated myself to write my own songs. I was only there for 90 days but that was just enough to write the first songs of our debut album “Born Immortal”. I already knew a drummer, I just needed a bassist, Gwenn was a great bass guitar player so I asked him to start a band with me when he heard the songs I wrote he decided to be the bassist of our band. So at first, there were only the three of us, there was more than enough inspiration because we were just angry young men!

You are playing music since 2003. What happened in those 8 years in the band?

Tim: Well as I said, there were just the three of us, but then Gwenn and I got into an argument which we could not work out so Gwenn left the band. But we had to move on, so my cousin Joeri Alar became our new bass guitar player, but after 2 years his girlfriend became pregnant so he could not play too many shows anymore. He decided to quit the band, lucky for us because Gwenn and I worked things out and so I asked Gwenn back in the band and he’s been back ever since. We also had a second guitarist to make our sound heavier. Peter Doornekamp was our second guitarist and we’ve recorded “The sword of our Ancestors” with him. One year later Peter decided to quit the band because he wanted to play a different style of music. Now we’ve got Richard van de Waerdt playing the second guitar! Olle Oele was our drummer for about 6 years but he also stopped because he wanted to make a different style of music (metal). Olle was a very good drummer but now we’ve got Quint Meerbeek on our side! He’s a good friend of Olle and he is, in my opinion, an even better drummer than Olle! So we’ve had a lot of switching around going on but I still have contact with all of my ex-band members, we’re all still good friends and the band mentality is still most of all about friendship. Just a couple of friends who want to make some real life Rock n Roll!

How is the Oi!-Scene in the Netherlands? Similar to that in Germany? I can think of bands such as Evil Conduct, Razorblade or Discipline?

Tim: Well the Dutch scene if a small scene, were everybody knows each other. You always see the same faces at gigs, the people in our scene are mostly between 25 and 45 years old and it kind of worries me that there is no real new breed like you have in Germany. But it is a loyal scene without political fuzz! The youngest band in Holland is The Patrons, you should check them out!

Your new album is a Split-Compilation with Jenny Woo. How it came about?

Tim: Well we were doing a split cd with a band from the Czech Republic but they broke up, and Jenny Woo was a good friend of mine and I really respected her as a musician. So I thought why not? So I asked Jenny: “We’ve recorded 6 songs for a split cd, do you want to do a split cd with us?” Just like that and so an idea became reality. Jenny’s sister lives in Amsterdam, she came to Holland to visit her sister. I asked Jenny to come and visit me and she came to my house to meet me and the Discharger-Boys! We were just drinking beer and playing guitar all night we had a great time! That was last year. Now we’re gonna do a tour of the split cd and I must say that I’m really proud of this split cd!

Tell us something about your Songs on the record.

Tim: Ok, “I believe” is a song about karma. If you do and think good things with a positive attitude you’ll be happy in life but if you hurt others around you and if you’re selfish you’ll end up fucked. I know things don’t always work out that way but if you keep trying to do good than I BELIEVE SOME DAY JUSTICE WILL BE DONE!

“Never Surrender” is a simple message: We won’t stop fighting for what we believe is right. We won’t give in we’d rather die!

“Death Before Dishonor”, this song is about the fucked up ways of society and the sick majority of people. Things are bad and you feel misunderstood and alone but it’s better to be alone than among the likes of them. I wrote the lyrics but it was Gwenn’s idea!

The rest of the songs are songs that we wanted to improve and a split offers that opportunity. And we did an Oppressed cover song just because their song has got balls!!!!

Your description is: “Many people say that violence is not the answer, but it’s a language people understand.” Why and what will you say?

Tim: Hahahaha yeah that’s true, violence and sex are the only things that are still primitive about human beings! And yes it is a language people understand, it’s kinda sad but it is true. People use violence to be feared, fear is an instrument of power. For most people, fear lasts longer than love. We all speak the language of violence If your really really hungry you’re gonna kill somebody and steal his food, if you don’t do that you’re not hungry! I hope you’ll understand now.

What are your plans for the future?

Tim: Our future plan is to play a lot of gigs next year and to promote the upcoming release of our new full-length cd ( we’re still looking for a right contract),  record some new video clips and we’ll keep on writing new angry songs! So there is always something to do!

Thank you! The last word belongs to you!

Tim: I want to thank Diana (Randale Records) for everything she did so far, and everyone that likes our music come to our concerts!