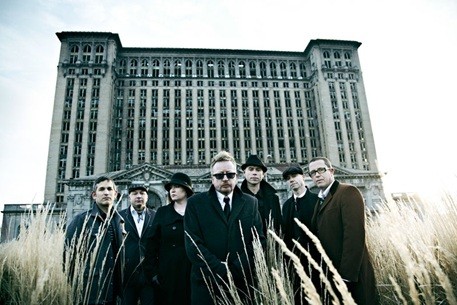 The Song „Don’t shut me down“ decribes actual problems of society. What’s the intention of the title regarding „Speed Of Darkness“?

Your last Album „Float“ was released in 2008. Why did it take so long to release a new record?

Dennis: We wanted to put out a live DVD/CD Live At The Greek Theatre before we made another record.

Does quality can suffer under high pressure and mass processing in relation to a recording process?

Dennis: I don’t think so. We try to make the best record we can. We just do what we do and whatever happens, happens.

How would you describe the new album and what are the biggest differences to the last record?

Dennis: I would say it’s different in it’s lyrics. Dave was inspired by the econimic collapse and it’s effects on the working class. We as a band wrote it like we have written all of our records, in a garage or basement at Dave’s house. This time we wrote it in Detroit and recorded it in an old church in Asheville North Carolina.

You choose Ryan Hewitt again, who had produced the ‚Float’ record. What challenges do you had this time while producing the songs?

Dennis: There wasn’t so much of a challenge because he has worked with us before. He is great at what he does. He comes into a session with fresh ears and has very good ideas. He also is a great recording engineer.

What are your favorite Songs on the album. Please explain us why?

Dennis: I would say „The Powers Out“ is one of my favorite. We took this dirty blues like song and combined it with a very traditional Irish riff. I think they work well together. I was really surprised at how well it works.

Do you enjoy touring and being on stage as much as you did in the beginning of your career?

Dennis: I’m having more fun than ever before. It just keeps getting better and better.

What have the most significant changes been on tour and in studio over for the last 14 years?

Dennis: We have grown as a band. We play better together. We have become very close like a second family. We also have been lucky to have a wonderful bunch of fans that always inspire us.

What has been the most funny situation or idea you ever transformed into a song?

Dennis: I think most of our songs are pretty serious.

What was your worst or weirdest experience on stage?

Dennis: I broke my thumb while wind milling during a guitar solo. It was only half way through the show. Very difficult to play Flogging Molly songs with a broken thumb.

What can we expect from you guys on the Tour this summer? What’s a Flogging Molly show like?

Dennis: They are like they all have been for 15 years. High energy, passionet, fast, traditional, loud, folk rock and roll.

If you hadn’t success as musicians, what would have been your profession?

Dennis: I was a house painter before I was in the band. I imagine I would be doing that while playing music at night.

If you could be another person just for one day, which person would you like to be and what would you do?

Dennis: I’d like to be president of the United States. I would bring our troops home, close all military bases, end all of our stupid wars. And then start helping people instead of bombing them.

Which places you recommend to somebody who visit Dublin and/or Los Angeles the first time?

So thanks for the interview, any closing remarks to the audience of Pressure Magazine?

Dennis: Thanks for taking the time to read this and hope to see you down the road at a Flogging Molly show.

Flogging Molly – Whiskey on a Sunday