PuNk´s NoT DeAd! Swedish punk rock band THE HEADLINES are excited and proud to finally release the new album “In The End” on 07.04.2017.

Contrary to the title Kerry Bomb and the band is definitely not near the end! After 10 years on the road and hundreds of shows all over the world, this year marks a new beginning and a new sound! Pressure Magazine talks to Kerry to find out more about the new album and how important it is to take a stand against fascism in punk rock songs.

Dear Kerry, Hi guys, please introduce yourself to our German readers who might don’t know you well.

As far I know you speak German as well, right..?

That’s right! And getting better every day… Is this a hint I should answer all questions in German? Haha!

No worries! When people from Germany thinks of Sweden the first thing might be IKEA … Now is your chance to point out the most attractive things Sweden stands for and we should visit if we ever come over to Sweden, Haha.

I actually don’t live in Sweden anymore. (I couldn’t stand it! Haha!!) I moved to Italy 6 months ago, but I still remember some sweet things about my home country… The most attractive thing about Sweden must be the nature with all its variations, from the ocean to the deep forests to the northern mountain landscape and the northern lights.

A unique thing about Sweden is the “Allemansrätt” which means you can camp anywhere in the free nature you want for one night and then move on to the next (no need to stay in the boring camping sites)! Make sure to experience Swedish Midsummer eve!

Please tell us your biggest surprise or funniest thing as you visited Germany?

This has to be when we recorded the video to our german song “Alles was war” in an abandoned children hospital in Berlin. Of course, you’re not allowed to trespass places like that and in the middle of the recording someone had called the police and we had to hide on the floor in one of the old treatment rooms for almost 2 hours with the police searching the building for us. They gave up but came back after a while and we had to get the hell out of there really fast!!

Another cool thing was when we played a show in a south German prison! Was a project called “Rock im Knast” and I think we never had such an enthusiastic audience as the prisoners who came to the show!

After Jake left the band and you took over the singing part, you guys probably received tons of critics. Please tell us about the reactions you get or reaction you still have in mind?

First of all, Jake has not left the band. He still writes songs, sings and plays lead guitar in The Headlines. He just doesn’t sing as much as before! We didn’t get any critics about this change in the line-up as far as I know. Only positive reactions!

Me and Jake are best friends and we are the ones who started the band together in young years. We both agreed that this move was the right thing to do!

A female singer in a punk rock band is still very rare. And in terms of the gender split also into many other jobs there seem to be lots of idiots out there who think „women are second class“. Do you feel it’s still hard to tackle this role or are we on a good way in a modern socially thinking?

It’s unfortunately very rare and yes, it’s hard! The hardest thing is that most of the male gender don’t even reflect or understand how much harder I have to work come forward as equally believable as my male colleagues in this business. I actually had people from record companies telling me to my face that it would be hard for them to sell our records because I’m a woman and a front woman is not as convincing as a front man in punk and rock music. Can you believe that?!

All I want is to get the same respect as any other front person and I will not give up until I get it!!!

Kerry, you have lots of tattoos, what motives was the first one and which one is the most important one for you?

My first one was a panther I had made when I was 14. Very unique! Hahaha! All my tattoos are important in a way, but I guess the one that I look at several times a day are the words I have written all over my right arm: “Culture, Alienation, Boredom and Despair”. These are the words from one of the bands that have influenced me the most “Manic Street Preachers”, and the words remind me of the struggles in life.

What music you listen to and which bands have inspired you while working on your own songs?

We listen to everything from Dr. Dre to Black Metal but The Headlines biggest influences are Ramones, Stiff Little fingers, and Rancid. Three Groups who said/say what they want with aim and precision in as Little time as possible and without bullshit. Let the songs do the talking!

What kind of hobbies do you have in your spare time and how much of them are left after your life turns into a professional career as a musician and I read something about movie making?

Jake is a true hockey fan and goes to a lot of games in his spare time. Peter is more into NFL, Peter#2.. hmm… Peter#2 likes to drink beer, and Cim likes to sit in her cabin in the woods and paint and write songs for different projects!

Let’s speak about your latest record, called „In the end“. What is the title about? And how long did it take to produce the record?

The title “In the end” is a comment on where we are as a human race. Our energy sources are drying up and the planet is destructing more and more; on an intellectual level, we are in a desert with stupidity being thought of as something valuable. We are in the end.

We have been working on the songs for over a year before the recording. The actual recording didn’t take more than 9 days. 3 days recording drums, bass and guitar. We always record live with all the instruments played at once in the same room and usually without a click. This makes the music more true, dynamic and not so „stiff“. For the vocals we had 4 days and the last 2 days for guitar solos and other features! The album is produced by Jacob Bredahl, former lead singer in Hatespere.

For the vocals, we had 4 days and the last 2 days for guitar solos and other features! The album is produced by Jacob Bredahl, former lead singer in Hatesphere.

Please describe your intention producing this record. What makes this record special for you this time? And where do you, especially as a musician, pay attention so that you are satisfied with the final result?

To us, it’s very special since it’s the first album with the new lin

e-up, with me on lead vocals and Cim on bass guitar! It’s still The Headlines but also a new sound in a way! The album is, I believe, the strongest one so far and the lyrics are very honest! As we try out new songs in our rehearsal room we always think of the whole album as a concept and all songs has to fit to the story that we are trying to tell. We also try to stay away from clichés and don’t always take the easy and most obvious way technically and musically!

As we try out new songs in our rehearsal room we always think of the whole album as a concept and all songs has to fit to the story that we are trying to tell. We also try to stay away from clichés and don’t always take the easy and most obvious way technically and musically!

Please point out your most beloved top three songs on the new album and tell us what is the story behind them?

“Concrete Jungle” is the last track on the record and it tells the story of self-destruction and the hate/love to our hometown Malmö. The violence, the boredom, the drugs, the struggle of finding your place and not feeling lonely in a jungle of so many people and impressions.

“Upstarts” is a stand-up and move forward song! It’s about punk and the band – what it’s all about!

“When the lights go out” has probably the most important message on the whole album. It’s about the awful right wing movements growing stronger and stronger not only in Sweden and Europe but also in the USA.

It’s about how important it is to take a stand against fascism, nationalism, and xenophobia and not take the easy way out saying you are “unpolitical” or “grey zone”. Saying you are unpolitical is saying you don’t have an opinion and that’s kind of terrible I think. 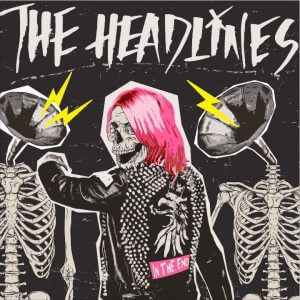 The artwork of „In the end“ is very impressive and old school. This reminds me on the old ‘Sex Pistols” Cover artworks. Who created the artwork and what is the creative idea behind it?

Thank you, I made the artwork! On this album I was influenced by old punk artwork such as Sex Pistols as you mention, but with a modern twist! Think it turned out pretty cool and fits to the album!

I do most of the artwork for the Headlines, including t-shirts and posters as well. I also do artwork for other bands, so if anyone reading this needs some cool stuff, hook me up!

What are your top 3 music bars in your hometown area which you can recommend for a Friday evening to have a beer with good music?

We have a bar in Malmö called “Häng Bar”. They play only punk, hardcore and sometimes hard rock, every night, every day of the week! The guys responsible for this cool place is actually one of Jake’s flat mates and plays in the cool band Knaegt!
Other cool places are “Backstage” in Trollhättan and “Crippas Café” in Göteborg!

What were the last 3 records you bought?

The last 3 albums were the first 3 albums from a fairly new Norwegian punk rock band called “Oslo Ess”! They have really found a clever twist on a music genre that nowadays most think is as dead as a T-rex.

Thanks, Kerry. The last words to your fans are yours.

Yes! Buy our new album “In The End”, learn the songs, and come to our German tour shows and sing along with us!!! You won’t regret it!

Here you can read the German translation of the interview

Buy THE HEADLINES – IN THE END on Amazon