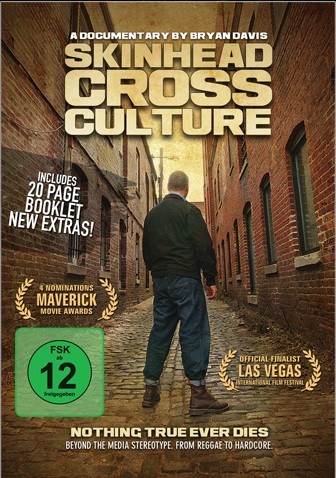 Pressure Magazine: Welcome Bryan, hope you´re fine? Tell me something about you. What are you doing and how old are you?

Bryan Davis:Not much to tell really. I’m 42 and live in Washington DC. I am creative for a living and work for myself. I do a combination of graphic design, photography, video, creative writing, etc. I got into Punk and Oi as a teenager. I had really been out of the scene since the early ’90s until a wave of nostalgia got me in touch with Sab of Iron Cross via My Space. The documentary evolved from there.

Pressure Magazine: You’ve made the Documentary “Skinhead Cross Culture”. Please explain the composition of the title. How did that come about?

Bryan Davis:A few years ago, I discovered on MySpace that Sab was about to release his first book, Skinhead Army. It was pure timing. After I got in touch with him and told him I was a Graphic Designer, he said he needed someone immediately to design the book’s cover. I stepped in and got it done. From then on we stayed in contact and I thought of the idea of posting an interview with him on YouTube to help promote the book. He agreed and I shot and edited an interview with him about Iron Cross and writing his first novel. I also shot Iron Cross live to include with the footage. I really liked what he said in the interview and I thought of expanding the concept. He was the one who suggested including other bands, not comfortable being the only voice. I went with him to an Agnostic Front show in Baltimore and talked with Roger and Vinnie.

I just got the impression there would be a lot of people interested in a documentary about Skinheads by Skinheads. That’s how it all started. The title came from a play on words with Iron “Cross” and the “cross of cultures” that created Skinhead (namely the Jamaican and British connection). My dad is British and I’ve been to England many times, so I had a perspective on Skinheads that was both American and European.

Pressure Magazine: Describe in a few words what´s it all about?

Bryan Davis:Simply a documentary about traditional Skinheads from America, Europe and beyond without all the politics and outside influences. I wanted to tell the truth about Skinheads, from its humble origins in England to its global impact, from a Skinhead perspective. Not from an outsider, media or factional perspective. The fact is, the media stereotype is a lie and most people only know about Skinheads from what they’ve read or seen in the media. The documentary also “crosses” over the various musical genres that make up the Skinhead soundtrack: Reggae, Ska, 2 Tone, Punk, Oi and Hardcore.

Pressure Magazine: In what way does the documentary represent your life or your environment?

Bryan Davis:Honestly, Skinhead is more a part of my past than my present. But like anything that makes a big impression on you when you’re young, it always stays with you. Making this documentary was like reliving my youth and it represents the reasons why I identified with Skinhead in the first place and got involved in the scene. I am very proud of it and its message of unity across borders and barriers, real and imagined. It is a tribute to the Spirit of ’69 and the Working Class at large. At least, that was my intention.

Pressure Magazine: Give me a statement about the working class. What is your opinion about it?

Think of all the services you take for granted, from the waitress who brings your food to the plumber who fixes your pipes. Some of these hard working folks through their sweat, skill and ingenuity achieve Middle Class status, but most never earn enough to reach that threshold. Yet their labor is still invaluable to society. I appreciate all people who work hard and pay their way. It’s a shame that society as a whole often doesn’t.

Bryan Davis:That many Skinheads are intelligent, articulate people with traditional values and convictions. Hard working folks that deserve respect and common decency. SCC represents the origins and spirit of the culture in defiance of the media stereotype (which has always been its biggest problem). It also flatly rejects the racist, political and factional elements that continue to try to infiltrate, influence and misuse the culture for their own twisted ideology and pointless agenda. Hitler and Stalin are dead. The war is over. Fuck off! Real skins don’t care about that stuff. They just want to be left alone to enjoy and live the culture.

Pressure Magazine: You´ve worked with bands like “The Aggrolites”, “Iron Cross”, and “Murphy´s Law”. How did that come about?

Bryan Davis:As stated before, it was really Sab that got the ball rolling. From there, it was just about contacting the bands and capturing them on camera when they were in town or close enough for me to travel to their gigs. The overseas footage was shot independently by those bands and sent to me electronically.

Pressure Magazine: Have you filmed or used some special kind of locations or places? Generally, in what kind of places are in SCC?

Bryan Davis: The structure of the documentary is like a mini-tour, traveling down the East Coast of America from Baltimore to Washington DC to Chapel Hill, then it jumps across the Atlantic to Munich, Germany, and Darlington in the North of England. Additional EXTRAS in the Sunny Bastards’ version were shot in other locations around Germany.

Pressure Magazine:What is the difference from SCC to, for example, “Skinhead Attitude”?

Bryan Davis:SCC is not about a silly “paradox” like Skinhead Attitude. That filmmaker was an outsider looking in… and it showed. SCC is by skins for skins. A totally different perspective in terms of the narrative. That film has some great interviews though and on the whole is one of the better docs on Skinheads. Doug Aubrey’s “World of Skinhead” was the best. I love that movie. This is England and Punk’s Not Dead were also influential.

Pressure Magazine: In the end, congratulations on the 4 Nominations from Maverick and the Official Finalist award in Las Vegas. Does this make you feel proud? Is it an incentive for you, maybe to make another Documentary about the Skinhead scene?

Bryan Davis:Thank you. Those were very unexpected but appreciated. Not really an incentive, but it feels good to be recognized. I’m very proud of the doc regardless of these accolades. But they do give the movie credibility in some circles. They also look cool on the cover (wink). Makes the film seem more legitimate to some people. The best part about it is that non-Skinheads were open minded enough to appreciate the doc for its content, raw style and message. It’s a very positive sign.

Pressure Magazine: What are your plans for the future?

Bryan Davis:Not sure. Definitely will continue making videos/movies. I’ll probably work on shorts and music videos as well as commercial projects (to pay the bills). A feature length movie is hard work and very time consuming. I’ve spent 3 years on SCC already. It’s a big commitment and not one I would enter into again unless I was really passionate about the project.

Pressure Magazine: Thank you for the interview and all the best to you!

Bryan Davis: Thanks for your interest in our little movie. Cheers and beers!

V/A – Waffenbrüder – A Tribute To OHL